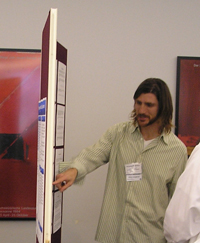 "Obesity is in the Eye of the Beholder: BMI and Socioeconomic Outcomes across Cohorts." (with Vida Maralani) Sociological Science, 2017.

"Effectiveness of Active Learning in Teaching Econometrics" (with George Orlov)

"The Intergenerational Transmission of Smoking and Schooling" (with Vida Maralani) (abstract)

Introduction to Probability and Statistics (ECON 3130)

Econometrics and Data Analysis I (ECON 131)

Course evaluations are imperfect measures of course quality. Students often don't realize the value of a class until years later. Similarly, students can be beguiled by an entertaining or easy professor. But I do believe students are pretty good at distinguishing bad classes from good classes. For example, the second time I taught microeconomics I did a better job than the first time and the evaluations reflect that. The bottom line is that I don't have any better measures of course quality, so I've posted all of my evaluations here.

Recently I've been recording short videos on statistical methods for my advanced seminar students to help them read primary research articles. These are available on my YouTube channel.

I spend a fair amount of my time writing code to either set up data, solve models, or estimate models. I use Stata when I can, but I tend to write programs in C when Stata can't do the job. There are lots of resources out there for learning Stata (e.g., idre at UCLA), but it's much harder for economists to get up to speed programming in C. I've written down a few C programming tips that might help.

When it comes to writing up my analyses, I use LaTeX. It's a wonderful and efficient tool for preparing documents with lots of math and it's straight-forward to automate the construction and inclusion of tables, figures, and bibliographies. I've also found that as I push LaTeX harder and harder, it becomes more and more like programming. Even in its simplest incarnation, you still have to compile your document and worry about syntax errors! As is the case for Stata, there are lots of resources on the web for learning LaTeX. I've put together a few of my favorite LaTeX links to help people get the most out of this powerful document markup language.

In the course of my research, I sometimes write code that other people might find useful.

nptools is a C library and a set of command-line programs that compute multivariate and univariate nonparametric densities and do various things with them. One of the most interesting things is computation of counterfactual densities of the sort reported in McKee and Todd (2011) and in fact, this software was originally written for that paper.

This code parallelizes the GNU Scientific Library implementation of the simulated annealling optimization algorithm. Simulated annealing is a global optimization algorithm that works well when the objective function is poorly behaved and may have multiple local minima. It's not the fastest algorithm in the world, but this code lets you exploit a cluster of computers to speed up the annealing process. Using this C code as a starting point, you should be able to plug in your own objective function and go. rw

summout is a collection of four new Stata commands that are used to generate tables of summary statistics. summ2 acts just like summarize, but it allows the use of summstore to save means, medians, and standard deviations of variables in a given sample. summout combines saved results to produce tables in Latex, tab-separated value, and fixed (human-readable) format. misumm does exactly the same thing as summ2, except it works with multiply imputed data sets created with Patrick Royston's ice command. All four commands come with Stata help files. This package was inspired by Ben Jann's outstanding estout package.

The Teach Better Podcast is a series of conversations with teachers about teaching. My cohost Edward O'Neill and I talk mostly with faculty in higher education, but will occasionally talk with other teachers too.

I've recently been recording short videos on econometric methods for my classes and sharing them on YouTube. I also post the occasional longer lecture such as one on evaluating social policy in Latin America that I did for the Yale Model UN Conference.

During the day, I spend my time teaching and doing research on economics and statistics at Yale, and most evenings and weekends, I'm playing with and taking care of my two wonderful girls. When inspiration strikes and deadlines permit, I write at High Variance. The topics are eclectic, but most articles seem to fall into a small number of categories: kids, music, tech, and economics.